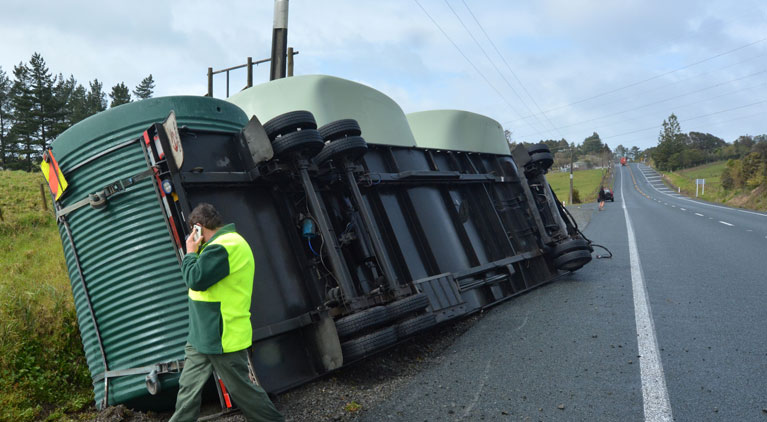 According to authorities, the military vehicle was involved in a rollover accident on Southbound 215 Freeway in Menifee, California, on Wednesday afternoon.

This military transport truck rolled over after crashing and eventually came off the embankment into a hardware store parking lot. Officials confirmed that the rollover accident resulted in 5 people being hospitalized with moderate to minor injuries.

As per the California Highway Patrol(CHP), the accident occurred at around 12:40 pm, on Freeway 215 in Menifee, just south of McCall Boulevard.

Officials from the CHP said the six-wheeler was part of a convoy and may have come from the US Marine Corps base at Camp Pendleton. The military vehicle was dragging a large trailer and suddenly lost control, turned from the right shoulder of the interstate, crossed the highway, and eventually landed sideways.

According to a report from the Riverside County Fire Department, the force of the rollover accident caused the military rig to land at the Sun City Hardware Parking Lot at 28250 McCall Boulevard.

There were reports that the accident caused a fuel leak, and a hazardous materials team was dispatched to clean up. A team of paramedics from the Riverside County Fire Department arrived at the scene a few minutes after the accident.

A rollover collision can cause serious damage, resulting in devastating losses. People involved in such accidents can also be seriously injured, depending on the extent of the impact.

What causes a rollover accident in California?

Any vehicle can roll over and several factors can cause these dangerous accidents:

As California rollover lawyers, we at the Khashan law firm know that a vehicle rollover may eventually become the most serious and dangerous type of vehicle accident. A rollover accident can be fatal or cause serious injury to the accident victim.

Our experienced team of lawyers understands the problems faced by victims of rollover accidents. If you or your loved one are injured or lose someone in a rollover accident, please contact us today at (951) 461-2387 for a free and confidential consultation.